Everything You Never Wanted to Know About IVs

When I was a little girl I had 10 cases of pneumonia in a year which landed me in the hospital every time.  Since my dad was the director of food services there, I equated hospitals with two things: all the chocolate pudding you can eat and needles. Sad to say, the former did not make up for the latter.

So I had this major needle phobia from about 2. It was so violent that vaccinations saw me strapped to a hard surface like Hannibal Lector from Silence of the Lambs, down to the grated mask.  When I grew up and became pregnant with our first, the thing that kept me up nights was that I would need an IV for the birth; not the pain of having someone ripped out of my body, mind you, just the IV.

Sure enough, I am a tough stick. Think tracks up and down both arms like a junkie and blood on the floor.  I’ve tried everything: deep breathing to relax, hydrating like a marathon runner, watching it go in, not watching it go in – nothing works.

The very worst part of my kidney transplant, aside from seeing my dear friend wheeled away to have her very first surgical experience because of me, was getting the IV.  First of all, the needle was the thickest tube in existence.  I had sucked from milkshake straws with smaller diameters.  Sure enough, it took so many tries I lost count after a while.  When they finally got the needle in I was so lightheaded and catatonic from the trauma Troy said they debated skipping the anesthesia, which would have saved us loads of money, which is why they used it in the end. The anesthesiologist needed a new summer home.

While I was under they put in a mainline thingy in my neck.  It reminded me of the dreadlock look the Predator sported in his movies, only it was 5 IVs than dangled from a hole just behind my ear.  It sounds gross, but I adored them, even affectionately naming each one (Luke, Leah, Yoda, Obi Wan and Tiffany).  I would have kept them my whole life if possible because you could both give meds and get blood painlessly from these tubes of joy.  But they wouldn’t let me keep them. Why?  Why?  It’s not like they were going to be passed on to the next patient.  I saw them get tossed in the red bio-hazard box on the wall.  I raised four people.  Maintaining a main line would be nothing. It was just mean to make us part.

Anyway, currently I’m fighting my second kidney infection in two weeks. The first time I had to have the IV moved  because my hospital stay was going to be least four days and the nurses in the ER are selfish and lazy.  They care nothing for placement, just want good stick statistics, and so go for the big veins in the crook of your dominant arm.  At this point your elbow might as well head to a Sandals resort for a well-deserved vacation because it will not be used for the duration of your stay. By the way, using your non-dominant hand to brush your teeth and taking a shower one handed is amusing enough for reality TV.

On this stay I learned the hard way that when you have an IV in long enough the vein will “go bad.” When this happens the  flesh around it painfully swells so you frantically depress the nurse call button like you’re communicating eminent disaster through Morse code while praying your arm doesn’t explode. To date, this has happened three times, so I have had four IVs in a week and it took eleven sticks to get there.  My arms look as colorful as a Cinco de Mayo parade. Each time I need a new one the nurse tells me that they’re calling in Flight for Life Team, as these guys are fantastic at giving IVs while moving in a helicopter, so should be able to find a vein they can drill.

They never actually call them. 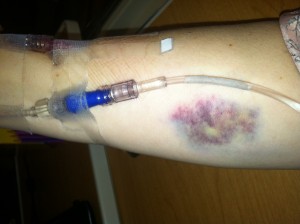 Just one of the "misses" that I'm quite proud of

I’m starting to think the promise of the Flight Team is their way of calming me down because, let’s face it, paramedics are just behind firemen on the hotness scale, and saving lives in a helicopter is totally swoon worthy.  So now I’m watching my door expecting a Brad Pitt look alike  in uniform to enter at any minute while “I’m Holding Out for a Hero” is playing in my head, instead of becoming more and more anxious about another IV.  Inevitably one of the floor nurses will show up and burst my bubble.  When she finally has success I’m handed saltines and a can of ginger ale to make up for the Flight Team ruse, as if that’s a fair exchange.  Still, this chick is in charge of my pain meds and stool softeners so I have to be gracious – and the cow knows it.

Nope, IVs are no fun.  At times I look up at my giant bags of antibiotics and saline and think, “With the right straw I could put those suckers down the old fashioned way if it meant relief from this needle taped to my arm.”  When I suggest this my nurse just smiles and makes reference to my stellar sense of humor.  Looks like I’m stuck with the IV.