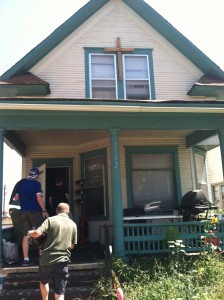 Moving into the Hobbit House

Last month I released two of my boys into an experience every entitled middle class college kid should have to go through: living off campus.

When I took my first child to college – and left him there – it was emotionally violent.  I literally heard the ripping sound coming from my heart as Troy walked me back to the car to go home (why is this not as tough for dads?).  What gave me comfort was knowing my son was living on campus; and that he would be home for Thanksgiving; and that we had family texting so I could bug him loads with nosy questions; and that he locked himself out of his room before we even left, so still kind of needed me.

Dorm life is a nice half step for parents because, while the child is not at home, they are somewhat supervised. Sort of like leaving them at summer camp.  A lot of stuff goes on that is frowned upon, but there is always a responsible adult to go to when things get out of hand. Yes, the dining is horrible, but all the food groups are covered, and someone cleans their bathroom: a real plus!  It’s when your kid leave the dorms to strike out on their own in some run down, low rent, inner city tenement type cracker box that the reality of their independence hits full force.

No exaggeration, I prayed for nine months that Tommy and Johnathan (a college junior and sophomore respectively) would find cheap housing for this year so that we could stop bleeding debt. Therefore, all were thrilled when the boys got into the “Disciple House” last spring.  Each paying $177 a month, the rent is super cheap so they can cover it, and their food, with their part-time jobs.  Plus, the Disciple House is packed with Christian guys who are committed to growing in their faith, so the influences around them are spectacular. What I forgot, but became crystal clear a last month, is that the place has no mother.

It all started with a cat.

My family is deathly allergic to cats.  Seriously, the boys once visited a home with several of them and for days Tommy was a living impression of Don Corleone with a head cold and I had to keep reminding myself that the slasher-film serial-killer breathing that floated through the house was just Johnathan in recovery. Since the Disciple House had a resident feline, the boys asked if they could take the “room” in  the basement where it never roamed.  I use the term room loosely because it was more or less an 8×8 storage closet with a 6 foot ceiling.  We had to measure to make sure the bunk beds would fit all three dimensions. Still, it was off a little kitchen-y thing and they would have their own bathroom.  Since there were seven other guys who would be living in the 1500 square-foot-split-between-three-levels house, this arrangement seemed tolerable…

The House Coordinator never told the other guys when we were coming – then headed off to Arizona – so while my boys had paid rent all summer to reserve their place, apparently no one had decided exactly where that place would be. Therefore, when we arrived, the storage closet bedroom looked like this. 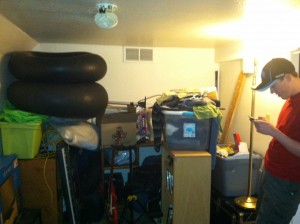 Johanthan, my 5'9" son, giving the room perspective. This is the spacious part. 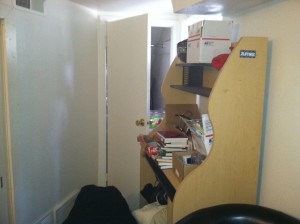 Where the room quickly shrinks down to 2 1/2 feet wide. Yikes.

The stuff in this space was not that of my sons.  Nor was it of any of the other boys living in the house.  It all belonged to a previous tenant who was graduated, employed, living elsewhere but had left his stuff, including his non-hypoallergenic cat, behind.

Going upstairs to ask the other residents what was up, I was confronted with no less than four very short, barefoot, amiable but clueless college boys. (I texted Troy “It’s a house of hobbits!” He proceeded to read this aloud in front of them (why? why?), which upgraded the description to “A house of humorless hobbits.”). Because their room was not ready, I got my mad mama bear growl going and four sets of furry feet began to scurry around looking for a solution.  They unceremoniously evicted the cat to the basement and assigned my boys a room upstairs as they wanted to “preserve the community feel” of the place (surely not because they didn’t want to empty out the packed storage closet room thing.  Nah, couldn’t be).  Only problem was, Tommy and Johnathan’s side of this new room was still chalk full of other kids’ stuff.  Oh, and it had been the cat’s main digs.

Just a few of the things the previous tenants left behind.

Cleaning out your teenage child’s bedroom is just about as gross as stain treating skid marks and catching vomit.  Still, a parent is somewhat immune to it because it is their child. Cleaning out the room of two young guys unrelated is almost too much to ask.  The only thing that made Troy and I able to dive into the years of junk under beds and stuffed in corners was the knowledge that we were creating space for our sons.

We found many mismatched socks, countless college papers, empty medication bottles and feathers all over (yes, feathers; little white, float up your nose if you disturb them feathers).  We now know the grades, medical history and social security number of two boys we have never seen.  (Through some miracle, there was no abandoned underwear.  Never doubt God’s goodness). The feathers – and there were lots of them – we figure are either the remains of a kill the cat dragged in or a pillow fight that went south. We then vacuumed until the old carpet’s nap stood at attention like a over zealous Marine Private – all the while engulfed in a whirling dervish of panicked, barefoot hobbits.

The bedroom was bad enough.  The bathroom of seven college boys defies description (two share an even smaller bath on the main floor).  The only evidence that I was not in a third world country was that there was an actual toilet instead of a hole in the ground with footprints on either side.  Frankly, I don’t want to talk about it, but will say the line of towels was cute. 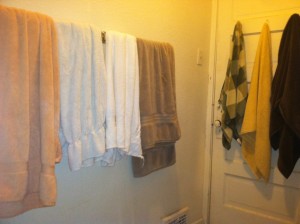 Evidence of seven guys for one small bath.

After cleaning the room out we moved our son’s stuff in then took them grocery shopping. This is when I began to panic in earnest.  The boys said they only needed allergy meds, cereal, ramen noodles, and ice cream.  After a lecture about how protein is the power source of the brain, they grudgingly let me add eggs, cheese, and peanut butter to the cart.  Not wanting to push my luck, I remained mute on the fruit and vegetable thing.

Returning to the house we were informed that there was no space in the kitchen for their food. They could have part of the basement fridge, but there was no room at all for anything else. Trying to maintain my cool, we ran to Target for a shelving system.  Now my boys have to leave the house, walk around the side, descend a precarious flight of stairs to the dank cellar – where the offending cat now lives – to retrieve their Totinos and have a pantry by their bunk bed. 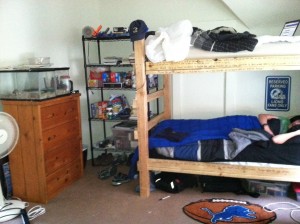 Eventually we had to leave.  Troy would not let me clean, saying the boys needed to figure it out, when we both know that what they all need is a house mother.  I would like to volunteer for the job.  It would only take a month or so to get the place ship shape, load the freezers with nutritious meals, and bathe the cat.  Plus I could  audit Johnathan’s Middle Ages Literature class.  Troy said no.  I’m still bitter.

Interesting thing is, the boys seem to be doing fine. No fainting from malnutrition or break outs of major debilitating diseases from their petrie dish pad.  And, though there are seven other guys living in a house made for three, Tommy and Johnathan seem to be taking it all with patient humor.

Of course, it could be indifference born out of popping Allegra like M&Ms, but whatever.